Your NCAA Bracket & Bracketology With Mom – The Rugged Male 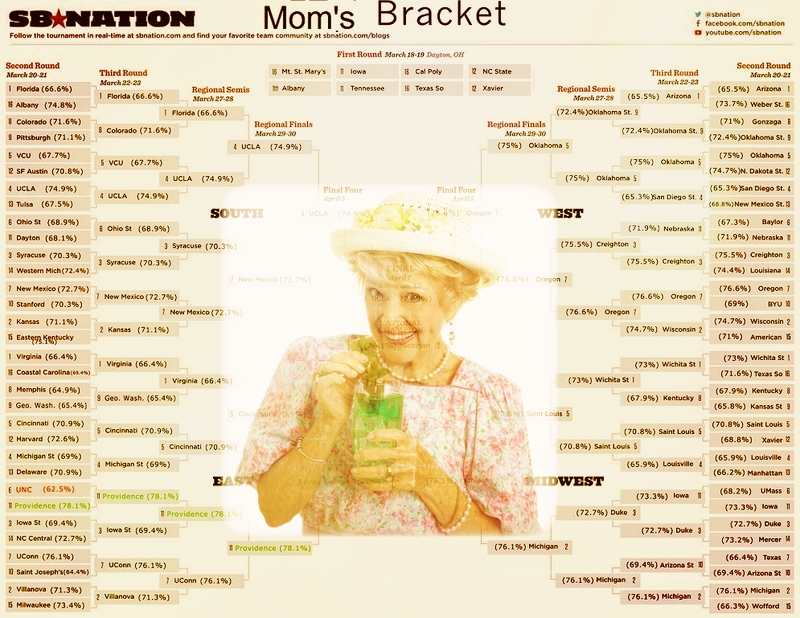 Your NCAA Bracket & Bracketology With Mom

I’m sorry your NCAA Tourney Bracket wasn’t perfect and you didn’t win Warren Buffett’s – I’m Really Bored With My Money, Billion Dollar Perfect Bracket Challenge Of Futility.  Don’t worry, mine wasn’t perfect either, nor was anyone’s after the first round.  The real story here is that not only was your bracket not perfect, it was a complete disaster seen from space.  It was worse than that lengthy text message you sent to your Ex at 2am.  Your bracket was, and is worse than Rocky V, (the one where he street fights).

No worries though, nobody has a perfect bracket.  The guys on TV have no clue, you have no clue, Larry from Accounting definitely has no clue, and that’s what makes the tournament fantastic.  The odds of filling out a perfect bracket are almost as good as the odds of getting attacked by a whale shark, mauled by a polar bear, then attacked by a great white shark, and then Kanye West asks you to be his sons Godfather all on your birthday.  The question is, while not perfect, how could you have made more accurate picks overall in the first round?  There is only one answer, only one logical scientific method to making better tourney picks for those close seeded early games.  There is only one person qualified to assist you in those difficult strategic X’s & O’s basketball decisions – you have to ask your Mom.

My Mom is a ruthless competitor basketball savant.  You need that kind of passion to fill out a serious bracket and you will not find a Southern lady with more basketball knowledge anywhere in the world (unless you look for one).  The following is a random collection of picks my Mom made prior to the opening rounds.  She has no knowledge of seeding, has watched zero college basketball games this year, and thinks the game would be a lot more interesting if it was played on grass like football and baseball because the mowing patterns of the grass have an artistic quality to them.

#8 Memphis Tigers vs #9 George Washington Colonials
Mom’s Pick:  Memphis
Reasoning:  Like Colonials with the big hair and the hats?  No. Tigers.
Result:  Correct, Memphis Wins by 5.

Mom struggled a bit with the 7 versus 10 seeds and went 2 for 4 overall with her strongest analysis so far:

#7 Oregon Ducks vs #10 BYU Cougars
Mom’s Pick:  Oregon Ducks
Reasoning:  It seems like a Cougar versus a Duck would be pretty unfair, but Uncle Billy lived in Oregon and he really enjoyed it.
Result:  Correct, Oregon Wins by 19.

Mom picked all #6 seeds to beat the #11 seeds except for one upset pick, Tennessee, because we have kin folk from there.  Since Dayton as well as Tennessee pulled the upset, that makes her 3 for 4.

When asked which #12 seed she liked to pull the upset, you guessed it:

And finally when asked which of the four #1 Seeds will make it to the championship the response came down to straight up basketball fundamentals.  And by fundamentals I mean she likes visiting Florida and commented that Gators are always hungry (translation: intangible desire to win) so that pretty much eliminated the Cavaliers, Wildcats, and definitely the Shockers.

So, that’s 9 for 13 correct picks and her Champion pick is looking good.  Not Too Shabby would be an understatement, but I believe the real Rugged Male takeaway life lesson out of all this is that you need to call your Mom.  Seriously, pick up the phone.  Whether it’s basketball picks, general dating life gossip, or questions about the 8th step in cooking a roast, you can never have too many chats with your Mom.  I will leave you with my Mom’s Elite Eight picks for Thursday and Friday as well as some knowledge she dropped on me many years ago that I still abide by today.

Dayton Flyers over Stanford Cardinals because I’d rather be a Flyer and I married a pilot.

Florida over UCLA, See above, Gators are hungry.

San Diego State Aztecs over Arizona because Aunt Wanda and Uncle Al met in San Diego and I like Aztecs and your Dad is an Indian.

Tennessee Volunteers over Michigan because our family would root for them.

Kentucky Wildcats over Louisville Cardinals because blue and white.

Michigan State Spartans over Virginia Cavaliers because ohhh like a Cavalier like 3 Musketeers with the plume thing?, oh I don’t want a plume hat, I’ll go with the other one.

Finally some parting advice from My Mom:

Remember that scene in Top Gun when Maverick follows the girl into the Ladies Room?
Don’t ever do that.  Ever.

Thanks For Reading & Good Luck !