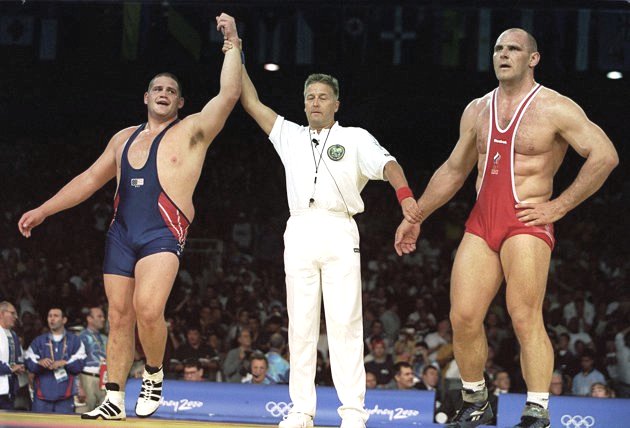 As many of you are aware, the sport of wrestling was dropped from the Olympic games this week by the International Olympic Committee.  The shockwave is still traveling the globe.

“It was a decision to look at the core sports, what works best for the Olympic games. This was the best program for the 2020 Olympics. This is not about what’s wrong with wrestling but what is good for the Games.”, says IOC spokesman Mark Adams.

Good For the games??   How can eliminating one of the original competitions from the ancient games held in Olympia be good for the game?  I mean, cmon, that’s like Zeus and Apollo type stuff.  While I am not a huge fan of male fights in tights, wrestling embodies the very essence of competition, two men, trying to impose their will on the other.  This is truly a setback for the Olympics and of the often questioned IOC.

While our intent is not to report on current events, we will point out injustices or non-rugged behavior at times.  We felt the need to get a little closer to this decision so that we may try to understand the logic.  In doing so, we were fortunate to connect with Richard Pound to bring you our first Rugged Male interview, and a great one at that.

Richard Pound was a swimming competitor at the 1960 Summer Olympics. He finished sixth in the 100 meter freestyle

and was also on Canada’s fourth place relay team. He would later win a number of medals at the 1962 Commonwealth Games. Retiring from swimming, he accepted a role with the Canadian Olympic Committee and eventually became its president.

In 1978, he was elected to the International Olympic Committee and put in charge of negotiating television and sponsorship deals. Pound revolutionized the Olympic movement using such deals to transform the IOC into a multi-billion dollar enterprise. He became known as an outspoken critic of corruption within the IOC. His criticisms were given a wide airing after the scandals surrounding the Salt Lake City Olympics broke, and he was then appointed head of the inquiry into the corruption. He also campaigned vehemently for stronger drug testing.

TRM:  Wrestling has been an Olympic sport in the modern Olympics dating back to 1896 in Athens.  Recently the IOC voted to eliminate it from the 2020 Olympic Games.  As a former IOC officer, can you shed some light on the process or factors that are evaluated prior to voting?

RWP:  In this case, I have no idea what was going through the minds of the Executive Board members.  There was no principled decision taken, but simply a heavily split personally motivated decision.  There should be specific criteria considered and a consensus decision taken, based on application of the criteria.

[The VP of International Modern Pentathlon, Juan Antonio Samaranch Jr., sits on the board of the IOC]

TRM:  Wrestling seems to be the very basis, or core of which the Olympics were based upon.  Two men at the same weight, on the ground competing to see who is better, without any factors except a clock and a circle boundary.  Does the IOC take into account any historical responsibilities, or is it all about television ratings?

RWP: I simply cannot understand the basis for the decision.  It should not all be about television ratings, despite the fact that 99.9% of the people who experience the Games do so through television.  Also, different parts of the world watch different sports.  We do not see much table tennis or badminton, but Asia is mad about both.  On the other hand, they probably do not watch much rowing or basketball in Asia.

TRM:  The Modern Pentathlon, a sport that requires a horse, a gun, a pool and a sword is generally referred to as the sport that is replacing wrestling.  How could the IOC view this as a sport that should be promoted worldwide when there are so many countries and people that will never have the resources to train?

RWP:  Your guess is as good as mine, but the outcome is certainly bizarre.  Modern Pentathlon is not the only other sport that should have been at risk in the process.

TRM:  Take us through how sports like Ping Pong, Trampoline and Race-Walking become Olympic competitions, despite a mass unappealing to viewers?

RWP:  Two of the three are disciplines within a sport (trampoline and race-walking), while table tennis is a separate sport.  I do not understand why trampoline has been added to the program.  Race walking has been around for a long time – its main problem is that too many of the walkers run, instead of walking and the officiating is not as rigorous as it should be. Table tennis is an exciting sport and we have to make sure that the program is not limited to sports popular only in America and Europe.

TRM:  What are your thoughts about wrestling being eliminated, and what would it take to get the sport reinstated for the 2020 Games?

RWP:  The IOC members would have to refuse to confirm the Executive Board decision to eliminate wrestling.  This is possible, but not likely, so wrestling will have to start an active campaign with the IOC members.

TRM:  What are your thoughts on baseball being cut from the Olympics after the 2008 Games ?

RWP:  Given the fact that we did not get the best players and that baseball was not interested in doing much about doping, I was neither surprised nor particularly sorry at the time.

TRM:  Did you ever vote to eliminate a sport from the Olympic program?   What sport and what were your reasons?

RWP:  I do not talk about specific sports, but have tried to send signals to some that they should not be too complacent about their place on the Olympic program.

TRM:  This is good stuff Richard, thank you very much, let’s broaden the questions.

TRM:  The host city/country chosen by the IOC benefits immensely from the Olympics. Does the committee ever consider need when choosing a city?  It would be nice to see some (qualified) cities that have fallen on hard times get the nod, and experience rejuvenation.

RWP:  At least from a financial perspective, this is relatively recent, stemming from the huge television rights fees and sponsorships generated.  From an overall perspective, the “need” question has been fairly common.  Antwerp and London “needed” something to jumpstart the effects of World Wars.  Rome was welcomed back as a loser of WW II in 1960, as was Tokyo in 1964.  Mexico needed big event credibility.  Munich was another WW II legacy.  Seoul needed the Games to take on the impact of Japan as an Asian Tiger.  Russia needed Sochi to build up the country’s winter sport infrastructure.  And so it goes…

TRM:   Is there an amusing or interesting story that you remember the most about your time in Rome at the 1960 Olympics.

RWP:  Two of my teammates (one of whom was recently married and thought the Olympic Flag would make a good nuptial bedspread) went into the Olympic Stadium at night – these were pre-Olympic security times – lowered the flag, decided it was too big for the bed, raised it back to the top of the flagpole and came back to the Olympic Village.

TRM:  You being a swimmer in the 1960 Olympics and later having much success in the private sector, what unique advice can you give The Rugged Male about achieving success and the pitfalls to avoid, as we sculpt ourselves into stand-up, honorable men?

1.    The only place where success comes before work is in the dictionary.

TRM:  Strong advice.  I can’t thank you enough for your time Richard.  I know the Rugged Male readers will enjoy reading this transcript.  You are a stand-up guy and I hope we can connect with you again some time.