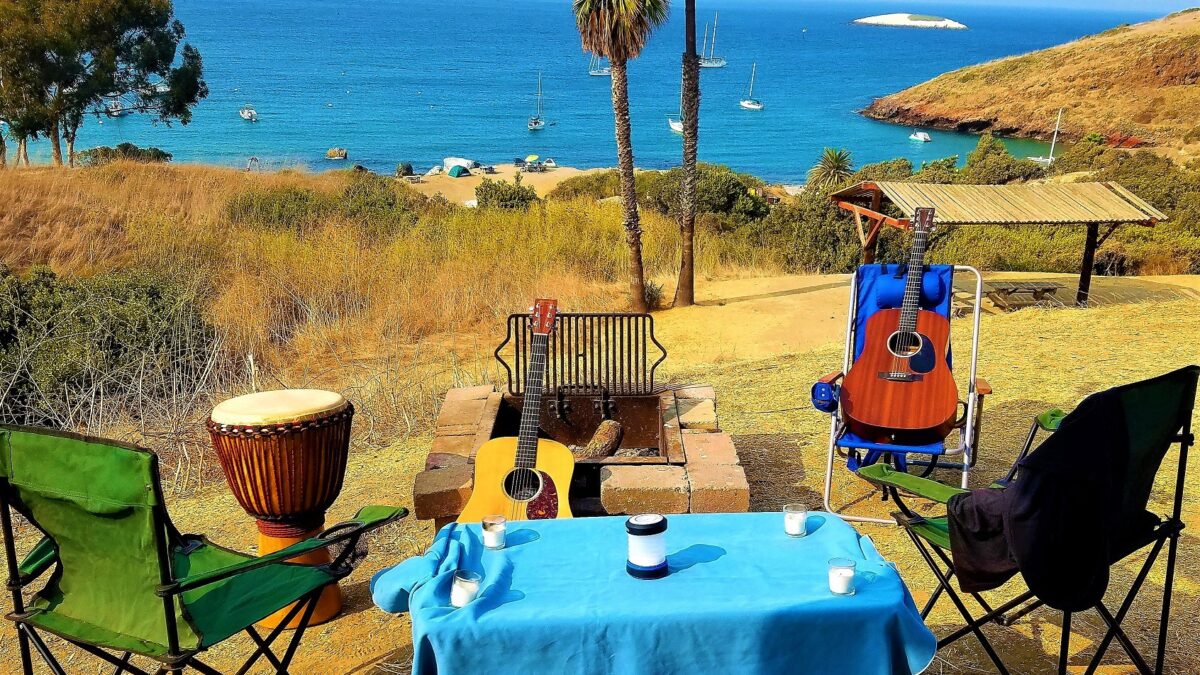 Birthdays for the rugged male should always be celebrated. Hell, everyone’s birthday should be celebrated!  You physically took a trip around the sun, an impressive accomplishment that deserves recognition even if you bring it upon yourself.

If you do have time to plan your birthday, it should be a time of reflection and unusual celebration, in other words – special.  That is exactly what I did last month.  I was pretty stoked considering Covid restrictions, Covid concerns, California wildfires, BLM protests, and the five civil wars America is currently fighting.

The Plan:  Captain the Catalina Channel with my mates for some camping, fishing and all around mischief on Santa Catalina Island

Sounds simple enough but there were some concerns the entire week leading up to it.  Perhaps it was that my boat was only 30 feet long, relatively small to make the 24 mile charter.  Maybe it was partly due to my marine mechanic telling me not to leave the harbor just two days prior to departure.  It might have been that we didn’t have GPS or radar and it was super foggy that week.  Oh I got it, must have been that the starboard starter is missing some teeth and needing a rebuild.  Nahhhh.

I was nervous about Mother Nature, like all captains.  Weather can change in 30 minutes in that channel and suddenly your peaceful crossing has become the Poseidon Adventure.  The only time I had captained that channel I experienced just that, in a 25 ft center console in 10 foot swells. Gnarly. 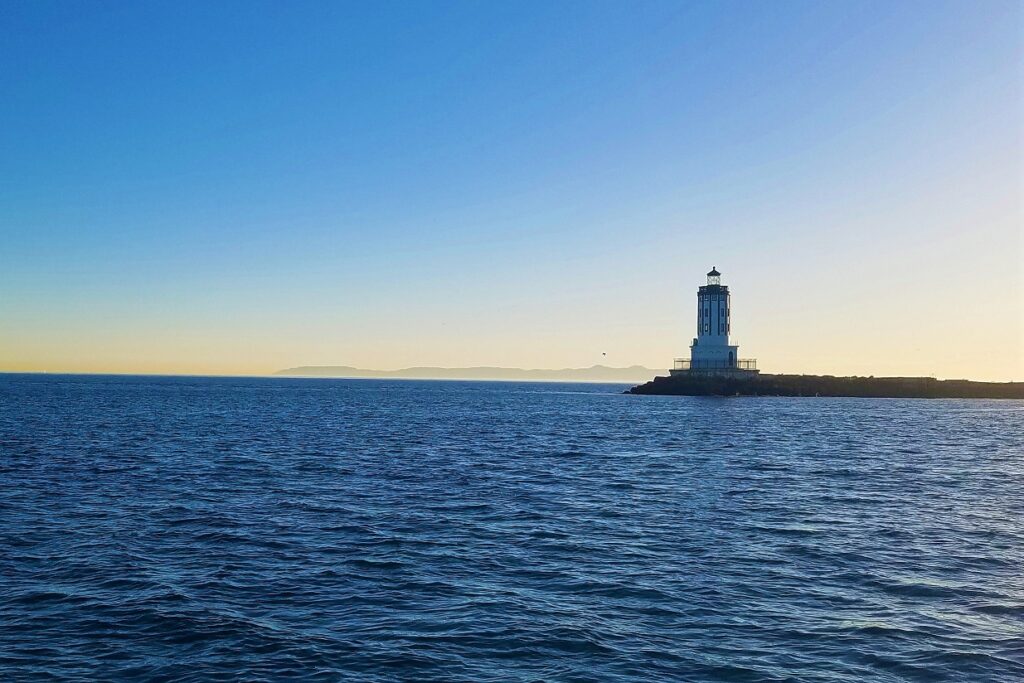 If you don’t know about Santa Catalina Island then we should start with the name. Everyone, and I mean everyone just calls it Catalina.  It used to be a spot for the Hollywood elite back in the day .. well, before ‘back in the day‘.  Beginning as early as 1911 Catalina Island served as location for more than 200 films.  Throughout this history, Catalina Island has been transformed into the coast of North Africa, Tahiti, the American Frontier and many others.  Catalina holds a unique place in the history of motion picture production as Hollywood’s exotic back lot.

Another interesting and lasting impression of Catalina is the observation of buffalo roaming the island.  Tatonka were brought to Catalina Island for the production of The Vanishing American, the film version of Zane Grey’s classic novel.  The herd of North American Bison has been roaming the hills of Catalina since December of 1924.

We pulled out of San Pedro harbor at the crack of 11am.  When your traveling with musicians, don’t expect an early start.  Our skies were tough to read as we had a lot of California wildfire smoke and coastal fog lingering for the past week.  We cruised passed Angels Gate lighthouse and shortly thereafter visibility improved until we had a full on blue bird.  Fog has been successfully eliminated as a threat to our journey.

As the lighthouse started to fade in the distance we set our compass and head into the blue skies and ocean. Shortly thereafter we picked up some escorts just off our stern.  A large school of dolphins seemed to share our goals for the day.  It seemed like a good time to crack our first beers.  Why not, mother nature had just joined the party. Cheers!

We kept the throttle at about 18 knots and enjoyed the ride. After about an hour we could see Catalina on the horizon.  Soon thereafter we were pulling into Two Harbors.  It’s a beautiful part of the island that does not have a town, more like an outpost or military base.  It’s called Two Harbors because the island is real skinny at that point. It’s an isthmus between the two harbors on both sides of the island.  You can walk to the other side of the island in 15 minutes.

There are no docks or slips in Two Harbors so your mooring skills need to be on point.  We hit up Channel 9 on the VHF radio to let the harbor master know we need a mooring near the campground.  Then we hit tied up at the main dock to unload some gear and have a look around. I was the only person who had been there before and it wasn’t for very long.

They have whats called a “gear haul” where they will drive your camping gear to your campsite for a nominal fee.  There is a significant size hill to get to the campsites from town, but its not bad if you pack light.  We had a lot of gear plus guitars so we took advantage of the service. I also added firewood to our haul. Our buddy Dan walked the trail with the guitars. 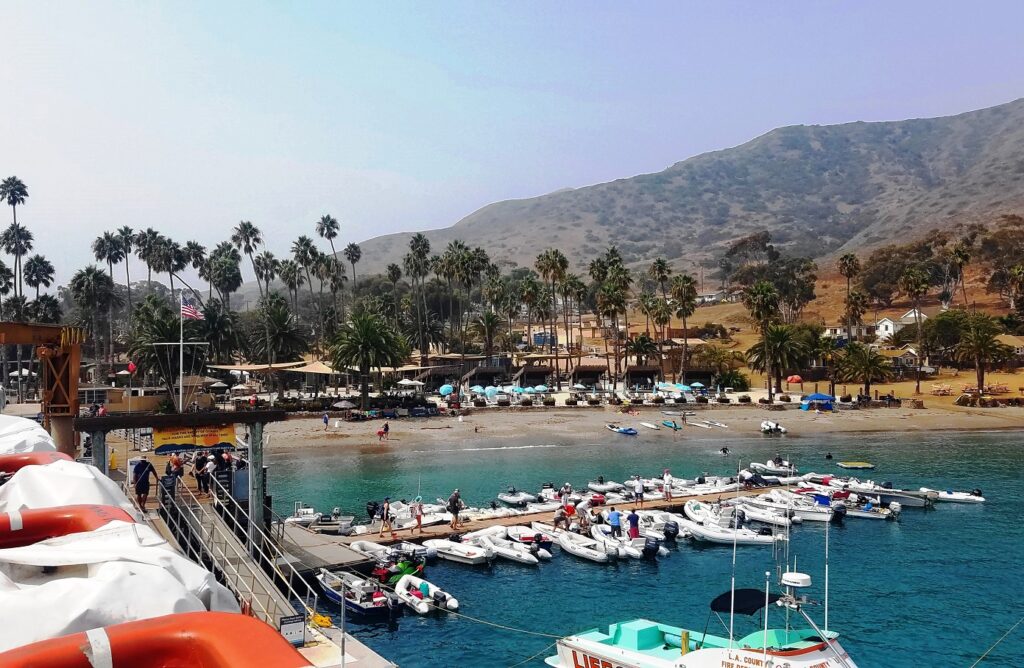 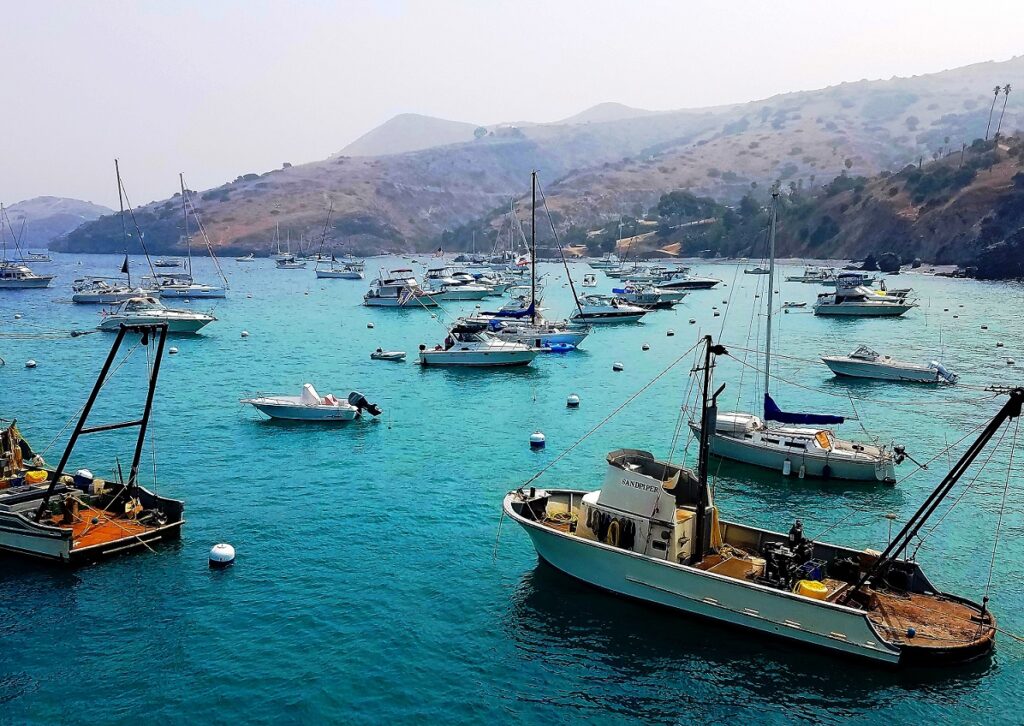 Our mooring and the campsites are at the end of these rows of boats.  We didn’t have a dinghy and planned on using a paddleboard to move some gear to shore.  This proved to be challenging as there was more waves than we anticipated in this cove.  The rocky beach and steep hill also made it difficult. Climbing a steep dirt hill in wet flip flops carrying gear was not fun, but it sure was beautiful.   The water around Catalina is crystal clear, making it a popular destination among the diving community.

We eventually got everything to our camp.  The campsites are great, well equipped with a picnic table and a fire pit with cooking grate.  Ours also had a structure over the table for some shade.  They are pretty close together which I imagine could be annoying, but we were in a shoulder season and midweek so it wasn’t bad.  I also get the feeling that everyone in Two Harbors is respectful.  Its much more of a nature enthusiasts place than tourist destination like Avalon – the proverbial “other side of the island”.  Except they are on the same side.

Two Harbors reminds me of K-58, a surf spot in Baja.  There was just a campground there for years. More and more surfers kept coming and eventually restaurants and tiny hotels started to pop up.  The evolution of Two Harbors is not much different.  The town looks like a military base.  The general store has added a restaurant, bar and beach club, but its all still very mellow.  Our campground has a noise ordinance of 10pm.

We got our camp set up, poured a couple tequilas and enjoyed the view.  The fuel dock told me it was the first they could see the mainland all week because of the wildfires.  It was starting to get dark and  we were hungry, having been up since 6am with little more than pistachios and a couple beers.  The boys packed some ribeyes that complimented the decor in our camp very nicely.  Dan and I opted to go caveman style and ate our steaks with our hands.  No need for silverware. 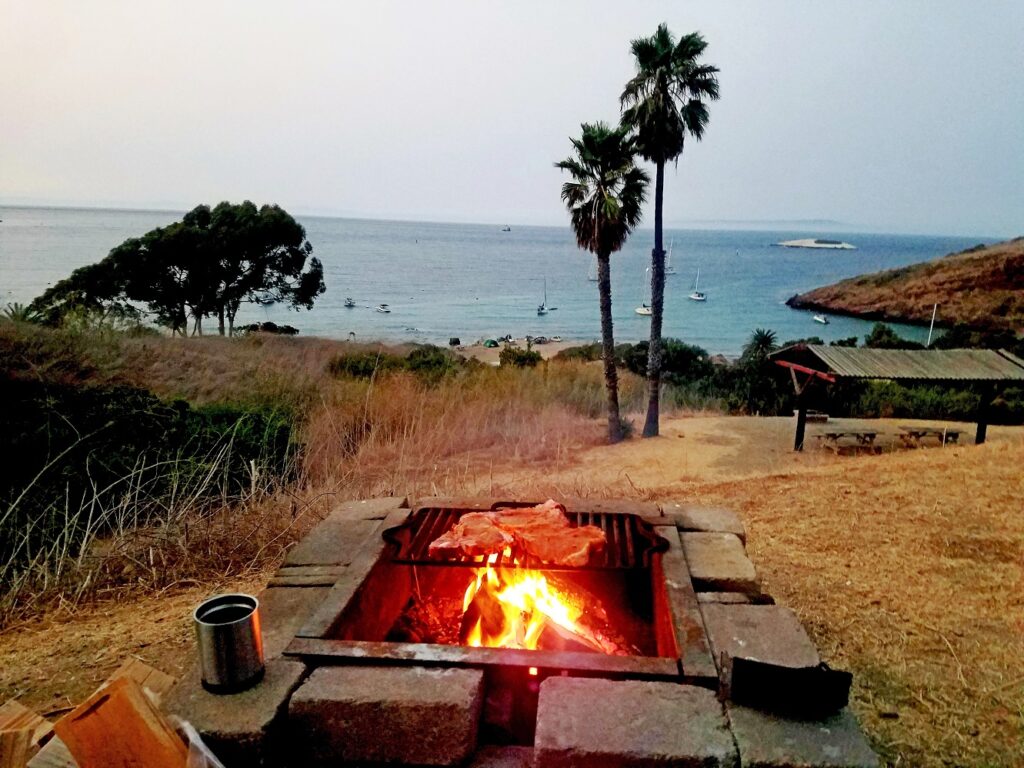 After dinner we played music til 10pm, receiving some applause from our fellow campers.  I hadn’t been camping in many years and that moment felt very dumb for not doing it more often.

The last part of the excursion was not fully baked yet, which is the way I like to travel.  Plan about 60% of the trip and wing it the rest of the time.  It allows for spontaneity which many of us dont have in our lives and badly need it.

The plan was for me to sleep on the boat while the boys spent the night in their tents.  It was a good plan, except again, no dinghy.

Each night around midnight I had a lonely walk down a steep, pitch black trail to the water’s rocky edge.  There I would launch Adam’s paddleboard with my clothes in a garbage bag tied around my neck.  It wasn’t bad but plenty of room for improvement. I was pretty wet once I got to the boat but it was great, I had warm bed and abundant moonlight.  There was much more rocking from the waves than anticipated.  Being tied up on a mooring is much different than being tied to a dock.  Nothing an Advil PM cant fix.

The next morning I hear, “Good Morning CuttyHunk, this is the Harbormaster”.  I came up top and said “Hello, you must be bringing me coffee”.   She smiled and asked me to come into town when I get a chance to pay for my mooring.  I nodded and she drove away in her skiff.

Our journey to Catalina is over, but our island adventure has just begun – I thought as I dove into the ocean.  The rest of the story is yours to create.  Here are some images from the rest of our trip. 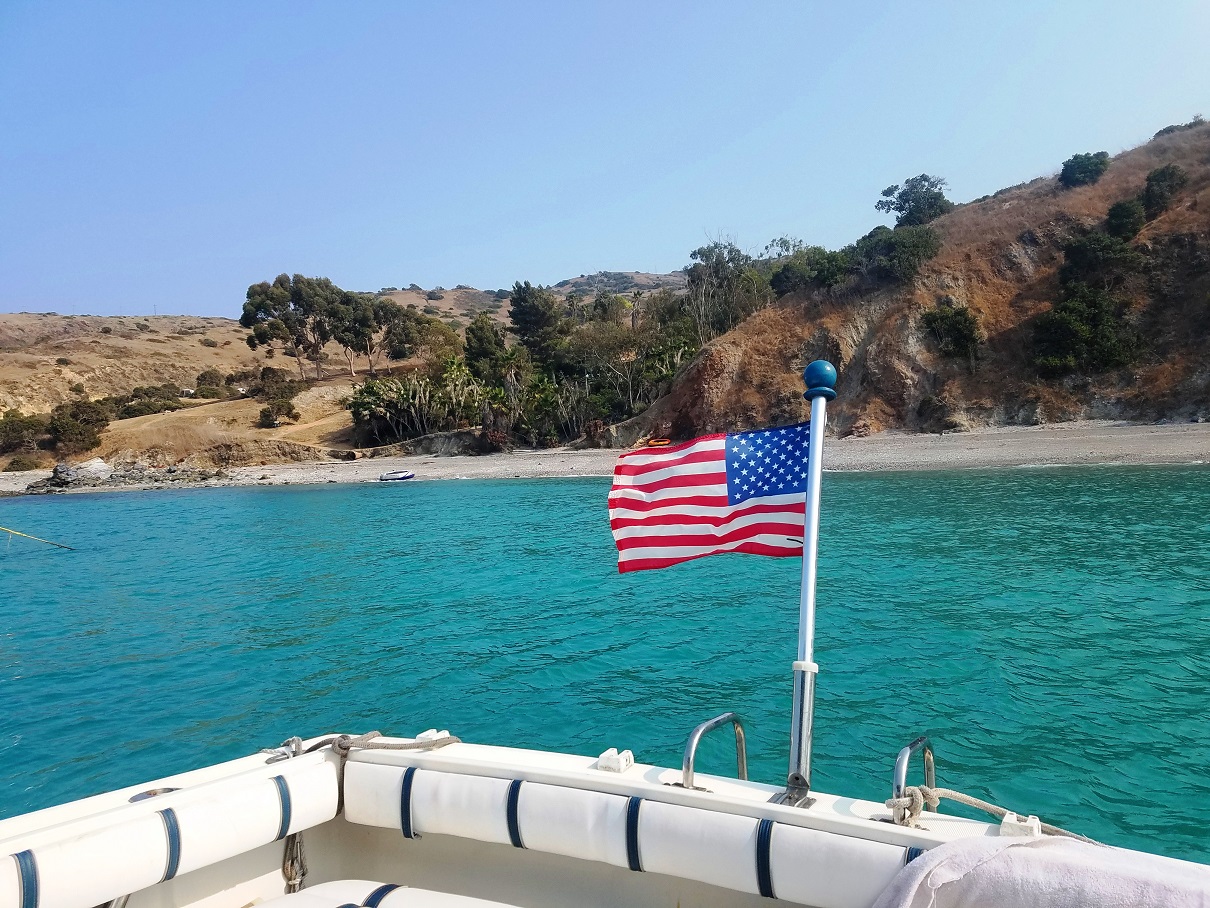 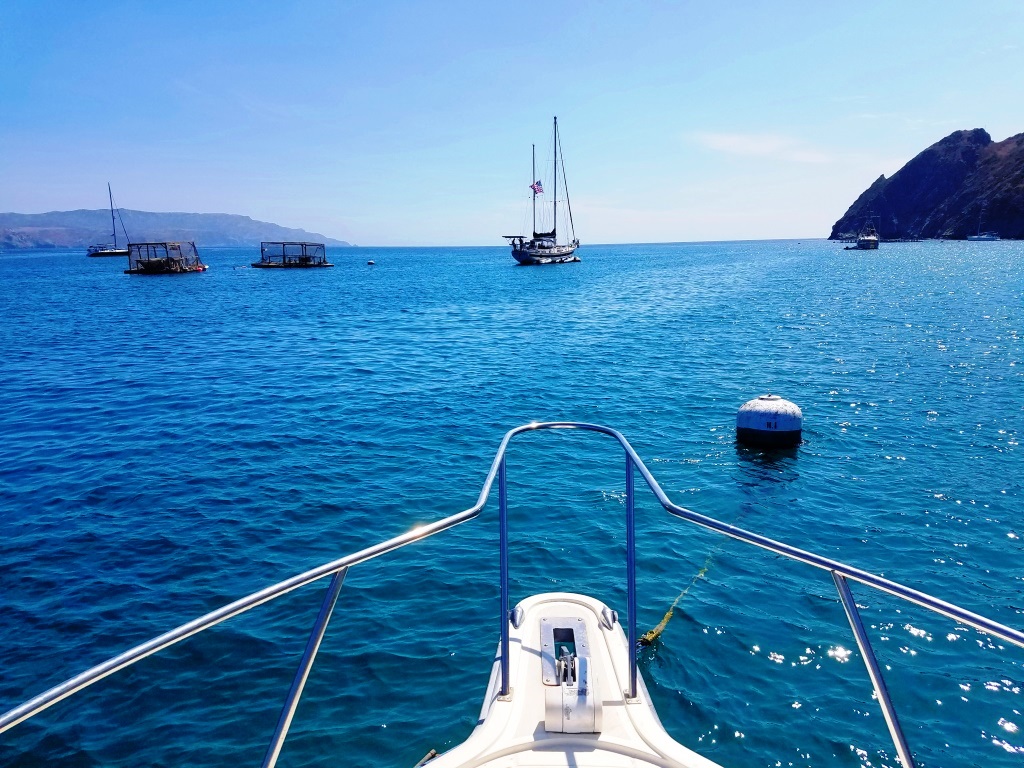 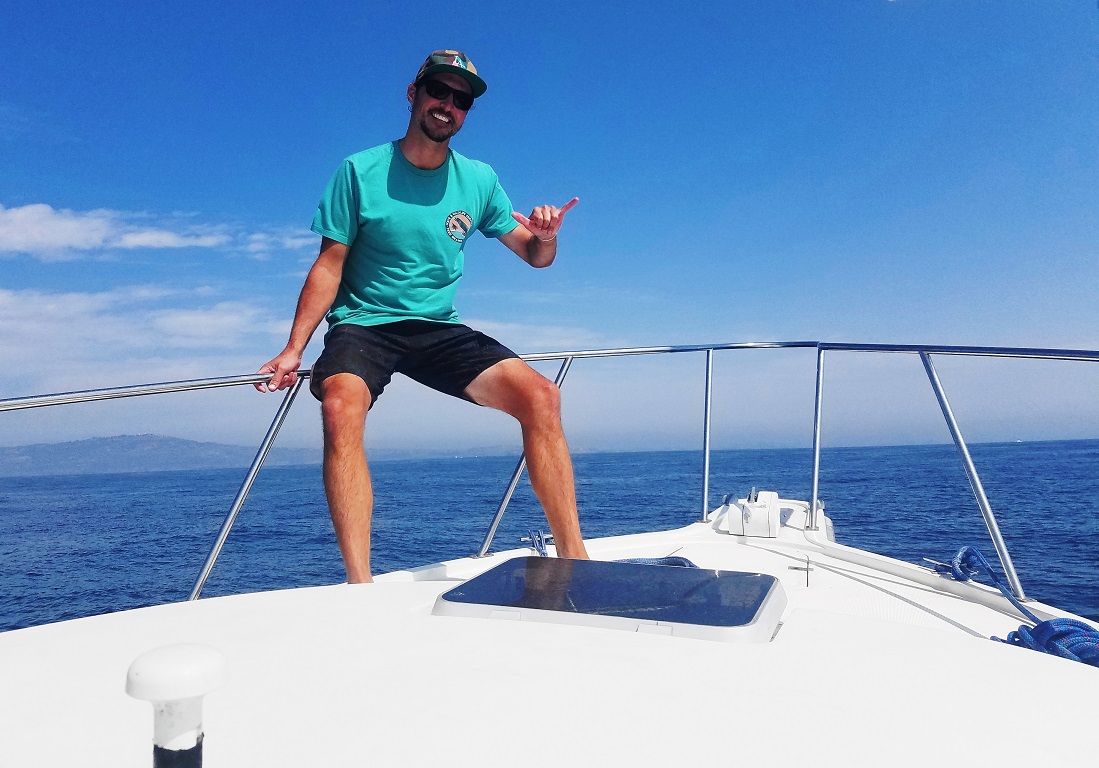 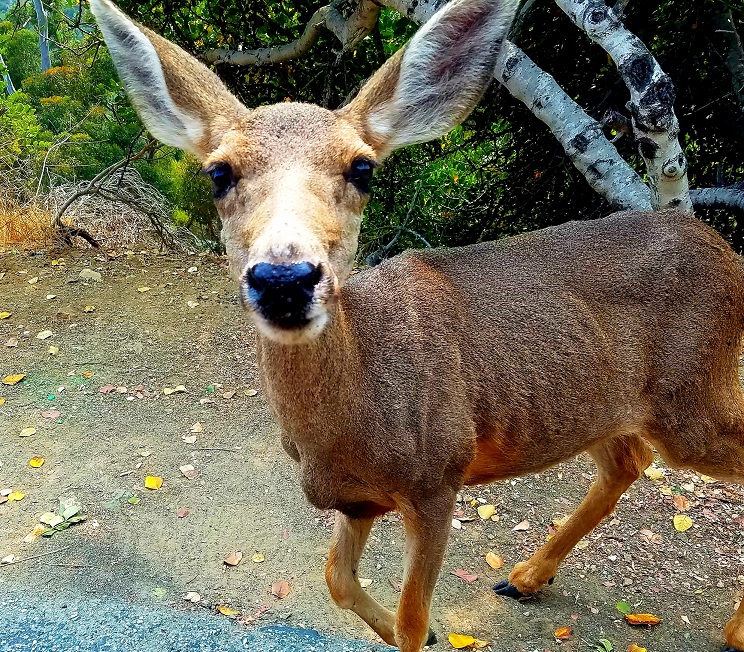 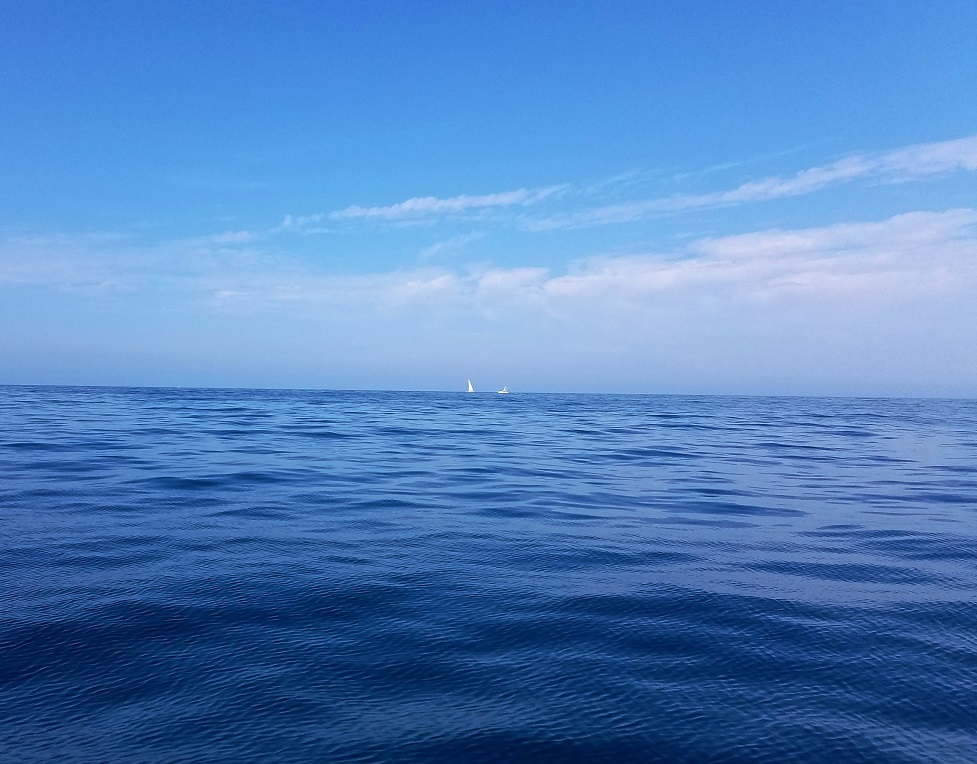 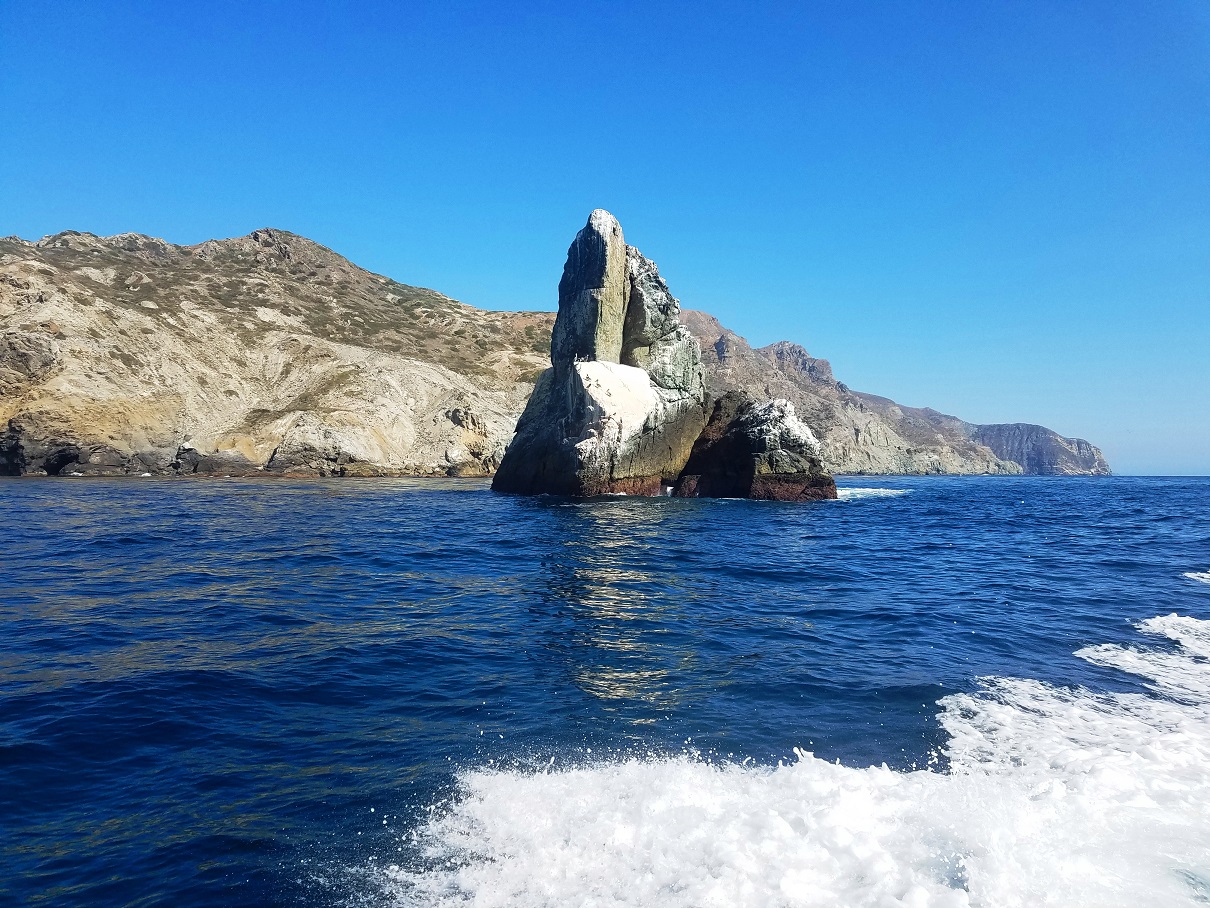 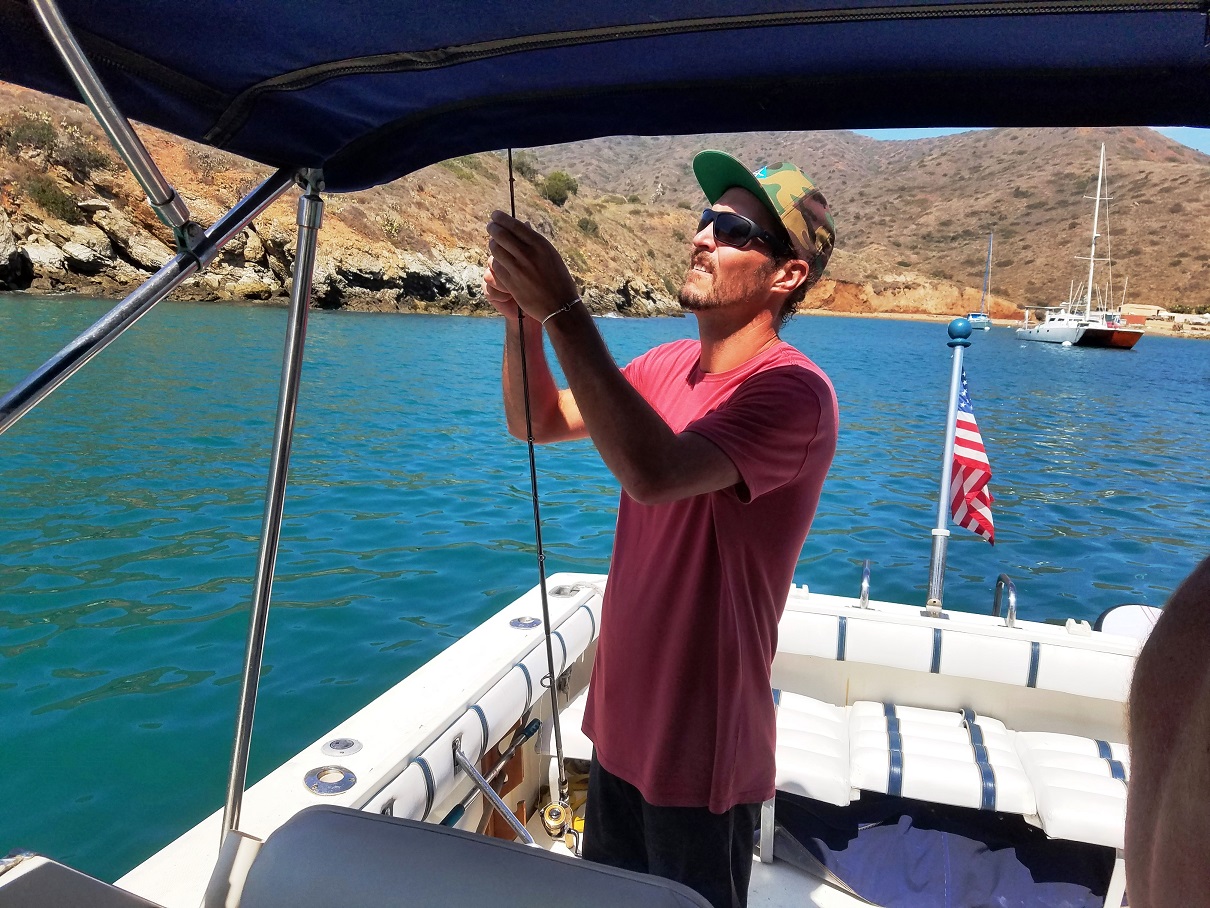 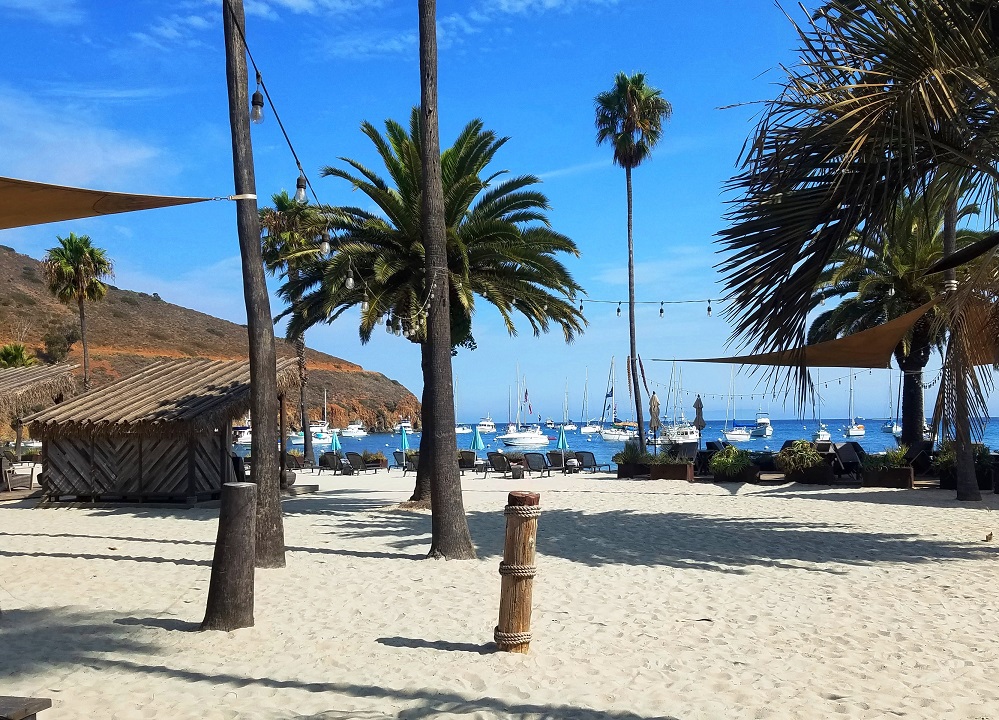 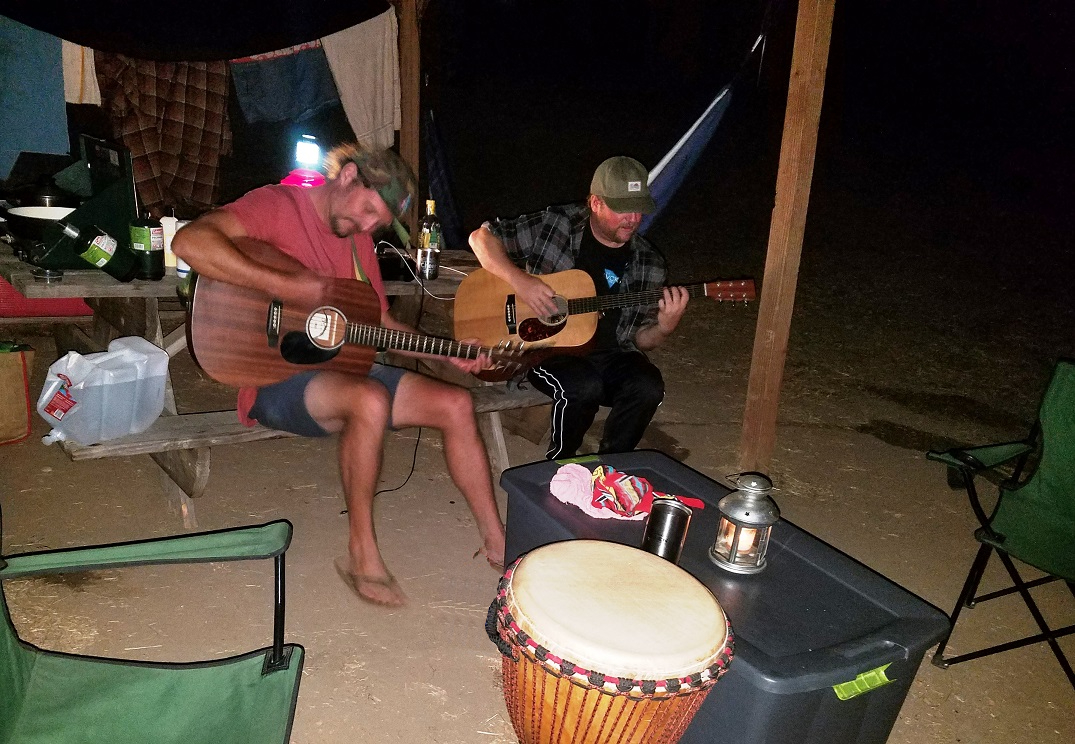 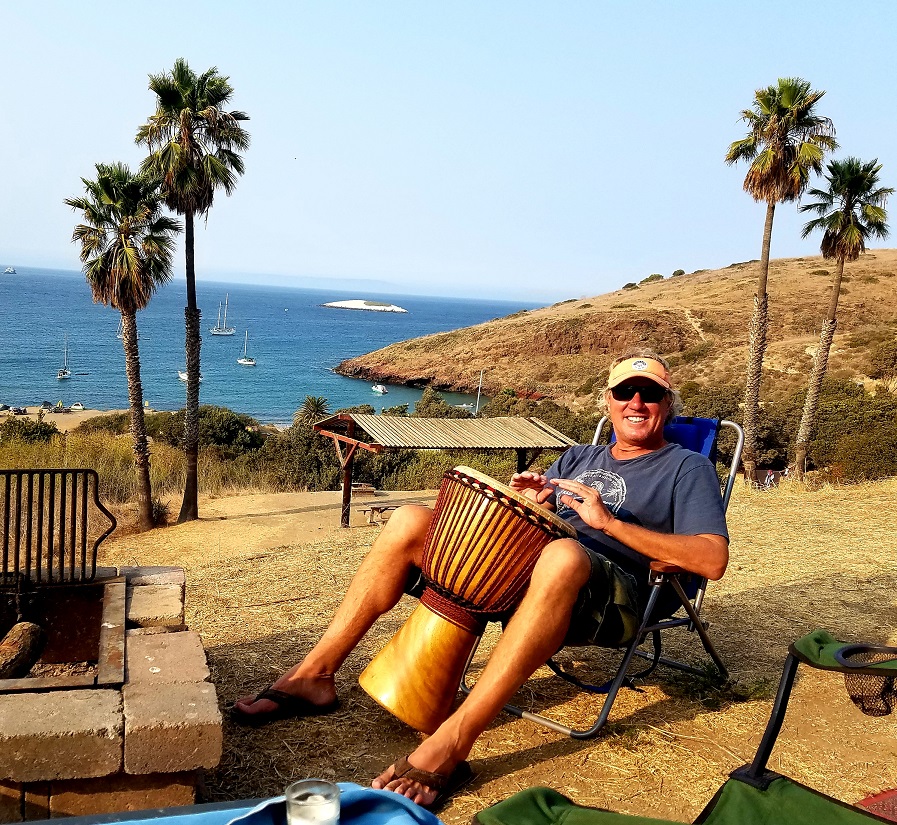