Sustainability On The Rugged Seas Of Maine 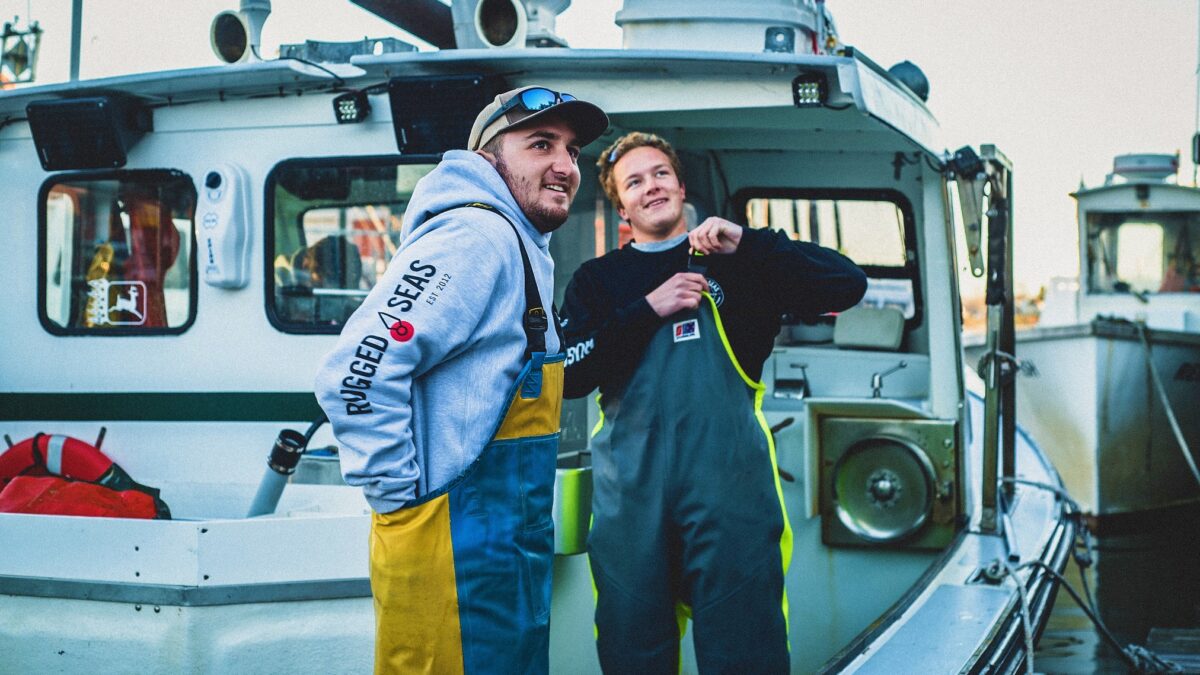 Sustainability On The Rugged Seas of Maine

As consumers most of us try to support brands that have some sense of morality and decency – if we have a choice.  We certainly try to do that here when we work with our sponsors – Duraflame, Penny Skateboards, Original Grain and Bulleit bourbon, to name a few.  Buying high quality products from brands that make a difference in the world feels good. It also softens the hit on the wallet.  The story of the Rugged Seas brand is all that and a plate of lobster.

I was first introduced to the Rugged Seas brand about a month ago from an old friend who grew up in Maine.  He noticed the similarities between their brand and our blog and brokered the introduction.  I couldn’t be more thankful.

The Rugged Seas is a brand started in 2012 by Taylor and Nikki Strout, who both come from a long line of Maine fishermen.  The inspiration for the brand came one season when Taylor was working in Dutch Harbor, Alaska (yes, the same Dutch Harbor on Deadliest Catch).  He noticed all the fishermen wore high quality gear that displayed the name of their fishery.

“I could tell their gear was worn with great pride,” Taylor explained, “fishing on the Bering Sea is a big deal, and their apparel was a way for fishermen to be recognized on shore for the physical and dangerous work that they do.”

This type of employer branding was not something that existed in Maine at the time.  So Taylor put pen to paper and started designing a logo, t-shirts and sweatshirts.  Soon after the Rugged Seas brand was born.  The young couple began filling orders out of their home while juggling multiple jobs, graduate school, maritime school and three children. 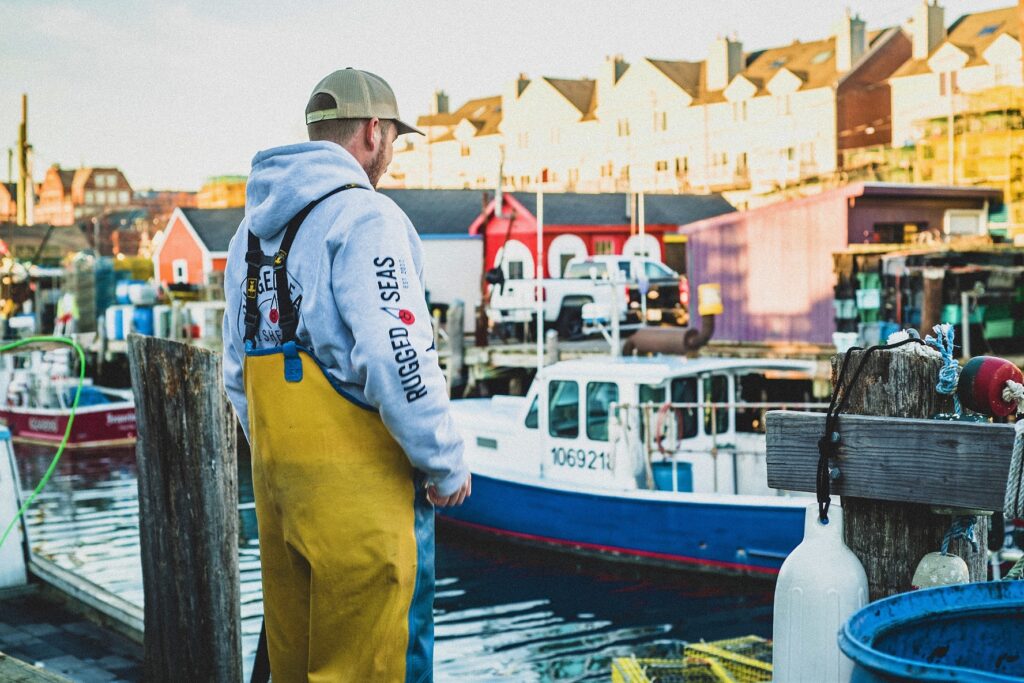 While commercial fishing and their new side hustle were paying the bills for their growing family, Taylor and Nikki knew they needed to do more to diversify their income.  Taylor also realized there was a piece missing with their newly founded Rugged Seas venture.

Emerging environmental legislation continues to stress the already challenged fishing industry in Maine. Lobsters are migrating further offshore & new zoning laws are forcing fishermen to go further out to sea. Commercial fishermen have to decide whether to invest in a larger boat that can handle the rugged seas.  This is not an easy decision for many of Maine’s fisherman who support a family and already have a thin profit margin.

“Maine’s working waterfront has been put in jeopardy in recent years. I want to do my part to support our fisherman and the community that depends on their hard work.”

Taylor is right.  There is a fight going on in Maine to save the working waterfronts that have been the backbone of the economy for the past century. Last year Maine’s “blue economy” contributed over $1B to the state.  But developers and wealthy landowners have different ideas about what the Maine waterfront should look like. Commercial wharfs that are extremely helpful to fishermen, lobstermen & other maritime businesses are disappearing and many commercial fisherman are running their businesses from recreational harbors & wharfs.  These docks don’t have the infrastructure fishermen need, such as loading docks, gear storage, cold storage, commercial hoists & forklifts making it much more difficult.

So he created a model by which a portion of all Rugged Seas’ sales would be donated to the Maine Lobstermen’s Association (MLA) and Maine Coast Fishermen’s Association (MCFA). The Strout’s goal is to eventually expand the sales model to benefit additional Maine waterfront organizations.  But that’s not all the Strout’s had in mind, they were just getting warmed up. 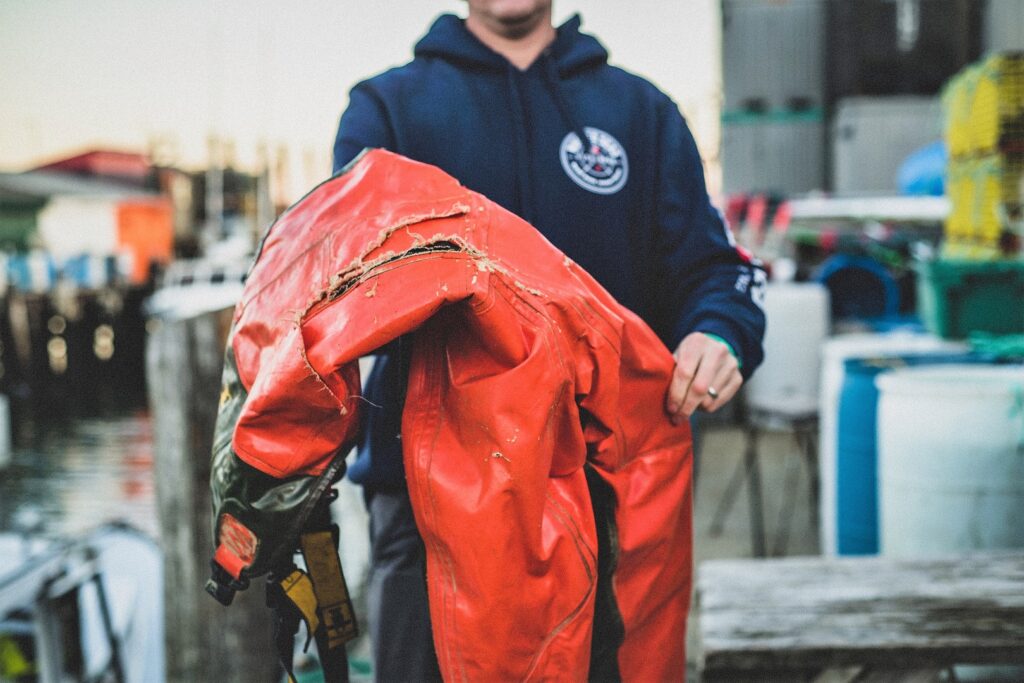 Taylor and Nikki wanted to expand the Rugged Seas product line beyond t-shirts & hoodies.  They realized that hauling bibs were used by all types of fishermen in Maine.  Furthermore, when fishermen needed new bibs because they were worn out or ripped, they would throw them out and by a new pair.  The Strouts wondered whether old fishing bibs could be recycled and repurposed into backpacks, tote bags or other products.

After a few unsuccessful attempts at washing and trying to recycle the fishing bibs at their home, Nikki and Taylor quickly realized they needed help with this piece.  They contacted Pratt Abbott, a full service garment care business with 12 locations in Maine.  The owners loved their idea and were completely on board to help in any way.  Awesome!

Rugged Seas then partnered with Hamilton Marine to place bib collection boxes at their stores in Maine to collect worn out bibs from local fisherman.  They also tapped Guy Cotten an environmentally conscious manufacturer of all weather fishermen apparel. Guy Cotten goes to great lengths to not waste any materials in their production process and were happy to allocate their unused materials to Rugged Seas.

With their materials in hand, the Strouts then chose Maine Line Leather and 320 Ink, both family run businesses in Maine to create the Rugged Seas new products.

“We are fortunate to partner with hardworking Maine companies to complete the full circle of our products, made in Maine.  The entire process starts and finishes with our fishermen purchasing and returning their bibs to local stores.” Taylor explained. 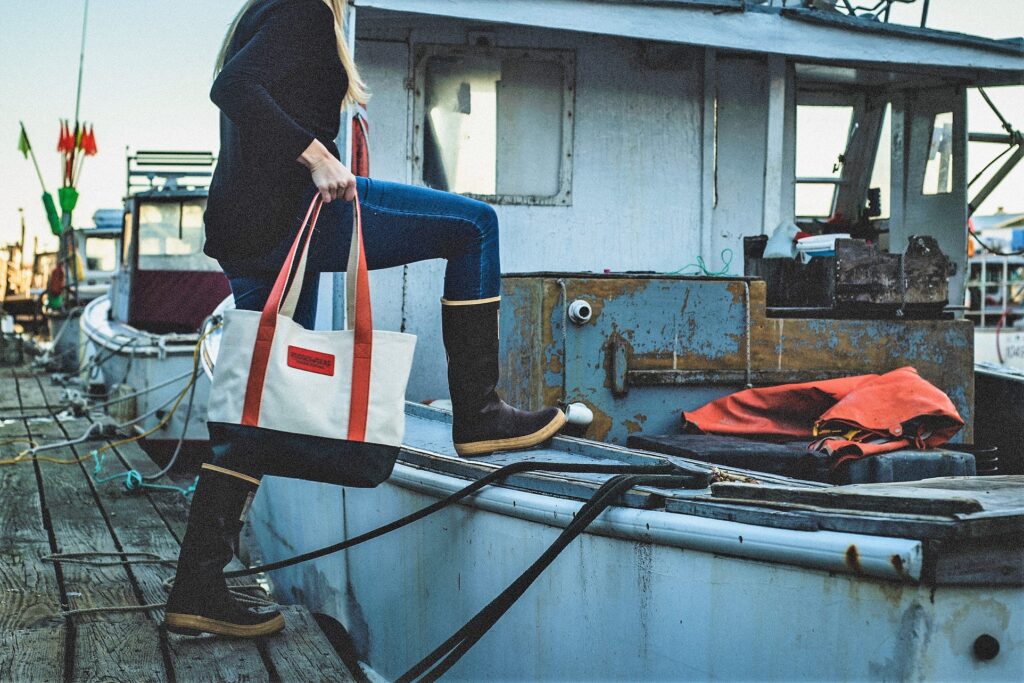 As someone who grew up in New England, I am drawn to the story and resonate deeply with the brand.  I feel fortunate in being asked to share the story and initiatives to help Maine fishermen, all started by an amazing family.  If you are an outdoor enthusiast or shop with an environmental conscience please check out the Rugged Seas.  Their line of beach bags, sweatshirts, t-shirts  & hats are all high quality and durable, as you would expect from anything that says – Made in Maine.

Thank You For Reading & Supporting Our Sponsors!