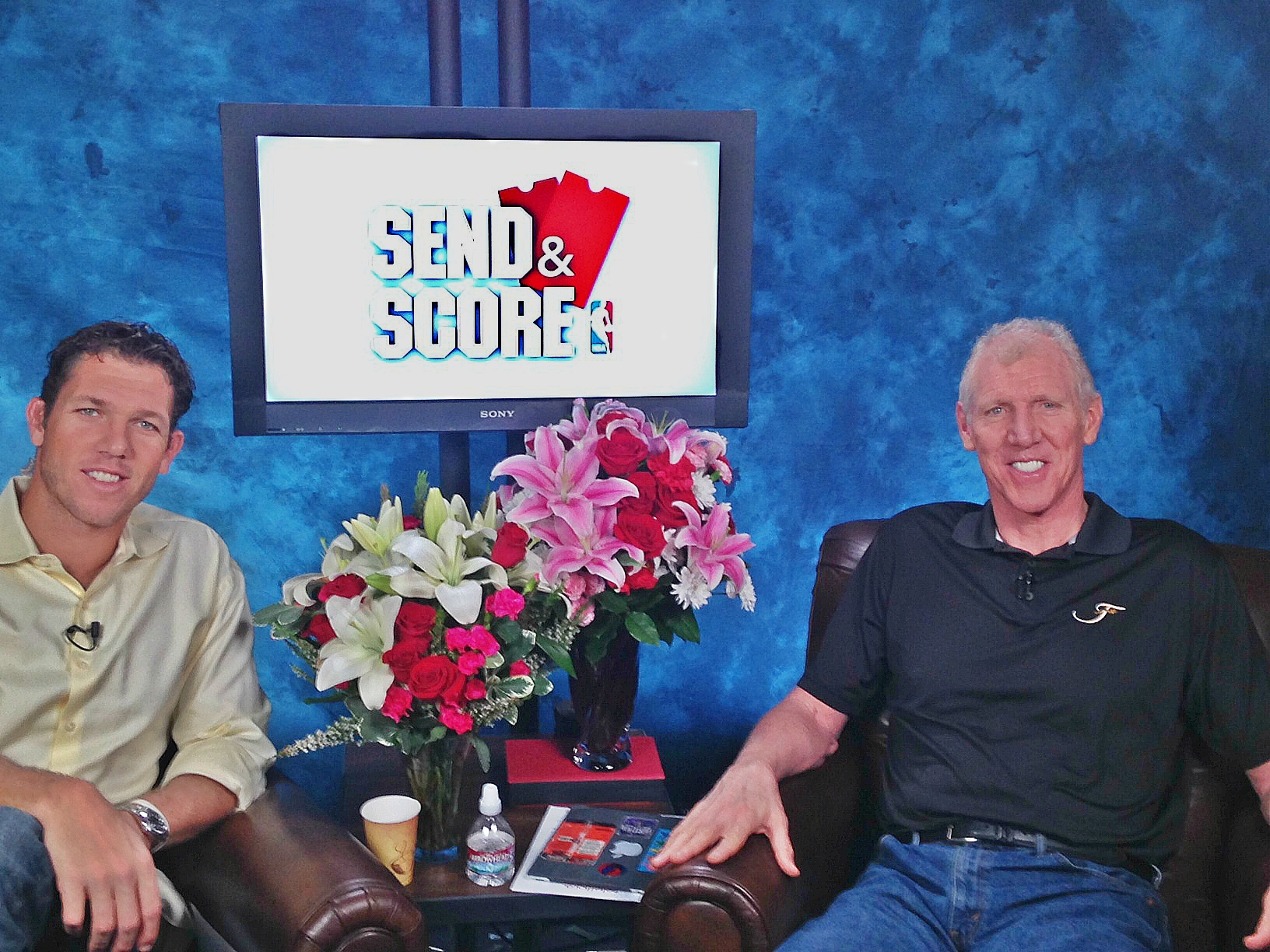 by Max February 10, 2014
Featured, Health, Interview, Lifestyle
ShareTweet
“Pete Seeger taught us to sprinkle that notion of happiness and joy, and of people doing great things.”

Last week The Rugged Male was invited to sit down with Hall of Fame NBA Player Bill Walton and his son Luke Walton, also an NBA Champion, as part of the NBA’s All Star Game and Valentine’s Day challenge with Teleflora – The Send & Score Challenge.

We discuss Valentine’s Day, The Grateful Dead, The Grammys and the role of media in today’s world.  Some of the more colorful excerpts follow.  You can view the entire Skype interview here.  Enjoy … we sure did!

Bill:  I’m the luckiest guy in the world, I’m Bill and this is my son Luke.  It’s so fantastic to be here as part of the NBA and Teleflora Send & Score challenge, because if you go to the website and order flowers you are automatically eligible to win all kinds of remarkable prizes.

Luke:  The grand prize is 4 free tickets to an NBA Playoff Game.

Bill:  I thought the grand prize is scoring?

Luke:  Well the grand prize is the reward of making someone happy, but the NBA is offering 4 free tickets to a playoff game, NBA gear and free flowers for a year.

Bill:  I love the Swirling Beauty flower bouquet because it depicts what my wife is all about; she is a swirling beauty, no question about that.

TRM:  That’s awesome Bill.  We plan to post this on our website which gets over 4000 visitors per month and is being read in 40 countries.

Bill:  Wow that is fantastic Max, congratulations.  Sounds like you been scoring too.

TRM:  What about music, say you are cooking dinner for your lady.  Many of our readers are Grateful Dead fans like yourselves. What are some of your favorite Dead songs that should be included on a Valentines Playlist.

Bill:  How about Althea, when you find yourself talking about less and less and forgetting the love that you bring, never forget there are things you can replace but others you can not.  Remember in order to get your woman to turn the love light on, you want to make sure you Send & Score some Teleflora flowers.   [May we also suggest Cassidy and Sunshine Day Dream]

TRM:  What about The Grammy’s did you watch them the other night?  Was there a performance you enjoyed, I’m sure Bill enjoyed The Highwaymen.

Luke:  The Grammys were awesome I watched the whole thing.  The combination of musicians performing together was great.

Bill:  Ohhh, Those are my guys right there, Kris Kristofferson , Merle Haggard, The Okie From Muskogee, Willie Nelson, Roll Me Up And Smoke Me When I Die –How cool is that?

How about the Super Bowl just a couple days ago, in particular Bob Dylan’s commercials. Those were fantastic.  When we talk about Valentines Day, just think about some of Bob’s great love songs – You Angel You – You’re as fine as anything is fine; Or how about Heart Of Mine, yes.

TRM:  That’s great Bill, we are starting a good playlist here.  How about Bruno Mars, did you enjoy him?  He is a little bit of a throwback looking like James Brown up there.

Luke:  Bruno Mars is awesome.  He is coming to LA in May, thanks for the reminder Max. I need to hit up Big Bill for some tickets.

TRM:  Luke, you have a great relationship with your Dad.  I’m wondering if you have an amusing story about some advice from your father that maybe didn’t go so well for Valentine’s Day?

Luke:  When I was younger his told me to invite the girls to come over to watch me play basketball and then tell them that I will take them to a movie when I’m done.  I quickly learned that was not the way to go about it.  Now that I am older he has given me the advice of “A Happy Wife Is A Happy Life” and until you have a happy home, nothing else is going to be smooth.

Bill:   Ahh, The Happy Home, the Grateful Dead’s Bob Weir.  [song: Beat On Down The Line] 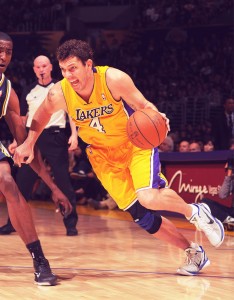 Luke:  Thanks Max I appreciate it.

Bill:  It was so cool we got to be there up in Aspen, it was such a great, great time, on top of the mountain, on top of the world and that pretty much sums up how we are feeling.

TRM:  What do you both think is the most important part of male grooming, if anything…. especially since you both must wear makeup these days.

Bill:  I don’t have to get my hair cut any more.

Luke:  That’s the tough part about not being an athlete.  When you are an athlete you can wear your hair any way you want as you’ve seen some of those photos of Big Bill out there playing in Portland before he lost his hair.

Bill:  Never cut your hair on game day.  I like to score on game day, not get my hair cut.

TRM:   I’m originally from Boston, so Im a lifelong Celtics fan.  Robert Parrish referred to you in a recent interview as “the most honest person I have ever met.”   Can you comment on any life lessons you took away from your time with Chief, Larry or Kevin in Boston.

BILL:  Hale to The Chief!  We love that guy, what a performer; what a human being.  I had the privilege of backing him up and enshrining him to the Basketball Hall Of Fame.  Playing behind Robert Parrish was very much like following a Brinks truck down a bumpy road and they forgot to close the back door. It was truly remarkable. His skill level was unsurpassed.  He was always an incredibly classy person and to be a teammate and become his friend and carry his bags on road trips, Robert was the anchor, he was the rock that every team needs.  We love that guy dearly and can’t wait to spend more time with him.  I should send him some flowers on Valentine’s Day.

TRM:   Bill, you were voted a Top 10 Male Pundit by Forbes Magazine, and Luke has now joined you as a member of the media.  What are your thoughts on media responsibility as we see Reality TV, Fox News & TMZ grabbing all the ratings?

Bill:  Think of what Pete Seeger taught us on a constant basis. Our blessings go out to the Seeger family, and at age 94, he did his job. The thing Pete kept trying to constantly drive home was that the key to success, the key to a better future was to go out and find the most positive optimistic stories in the world and spread them around.  Sprinkle that notion of happiness and joy, and of people doing great things.  That’s what I love about the world of media today.  Even though there are some sources passing out messages of fear, a message of “If you don’t buy this youre going to die”.  I love the message of hope, and that’s why I’m here today with Teleflora and the NBA.

The NBA All Star weekend is greatest 72 hours in sports, a grand celebration of all that is right in the world and at the end of the day, everybody wins, and I’m hoping to score.

TRM:  That’s a really good point. Valentine’s Day is not just a day to send flowers to your significant other.  There are a lot of single people in the world, but we all have moms, aunts & Robert Parrishs who were impactful in our lives.

Bill:  It’s about love. Love is the single most powerful and important word and notion in our culture and language.  Until the power of love supersedes the love of power we have no chance of ever being successful.

TRM:  That’s really great Bill.  Do you have any Send & Score advice for the single man out there?

Luke:  Enjoy NBA All-Star Weekend.  Send your mother or somebody special in your life some flowers.

TRM:  We couldn’t agree more.  What a pleasure to speak with both of you, I wish you and your families all the best and thank you for hanging out with The Rugged Male, our readers will dig this.  It was great to see you again Bill! 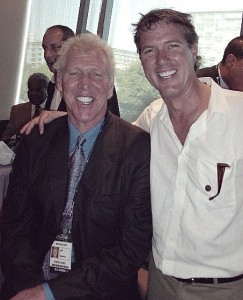 Thank Your For Reading!