The Awesomeness of The Ashley Madison Hack – The Rugged Male 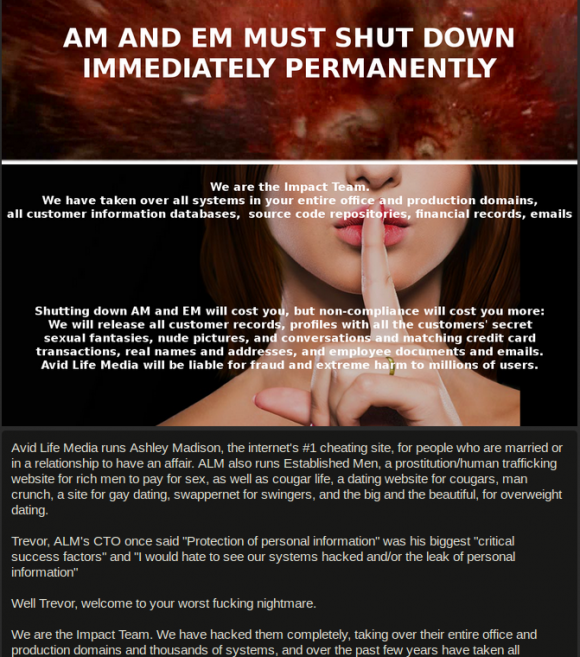 The Awesomeness of The Ashley Madison Hack

Cant seem to get enough of this true life Mr. Robot story.  A group of vigilante hackers, referring to themselves as The Impact Team hacked the marital cheating site Ashley Madison, whose slogan is “Life Is Short, Have An Affair”.  The hackers threatened to release 30 million user records if they did not shut down the site claiming AM takes advantage of others loss.  I don’t know where to begin with the awesomeness of this story.  Here are some of the more colorful aspects of this story.

While its certainly not cool to publish people’s personal data, these subscribers should understand their vulnerabilities with a site like this and perhaps understand how the internet works (umm..it’s not really a “cloud”, its a server in a datacenter, connected to the public internet??). What The Impact Team did should be applauded.  Its become sickening to watch America’s persona get trashed by scumbags like this taking advantage of people.  Its one thing to fill a void, (say for lonely people), but another to not even deliver and be a complete fraud.  That’s what great about the Internet.  For every evil hacker or annoying software company overcharging us for “licenses”, there are 10 times the amount of Robin Hood hackers and open source programmers to stomp them.  Had he launched his business brick & mortar, (which is probably what it should be), he would have been fine, but pissing people off, then leaving the (internet) door trusted to an incompetent CTO was not smart.

Can’t wait for The Impact Team’s second act, they suggest corrupt politicians may be the next target.

A fabulous choice … try to work in some Corrupt Wall Street while you’re in there. It wont be hard to find.  It’s typically right next to Corrupt Politician in most database schema.